Ambassador for a musical

Initially, Mower began her crusade by using the show’s music and lyrics as a teaching tool for her young jazz choral students at the Greater Hartford Aacademy of the Arts, a CREC magnet school. Mower’s advocacy has since leaped from the groves of academe to the grooves of live performances. Her award-winning choir (heard on this page) has spread the word by singing selections from the musical in prestigious venues ranging from the White House in 1997 to the Monterey Jazz Festival in 2003.

Despite an initial burst of critical acclaim in 1962, Dave and Iola Brubeck's satirical musical, "The Real Ambassadors," has pretty much lain moldering in its premature grave, virtually out-of-sight and forgotten.

Despite an encore presentation a few years ago and an unsuccessful bid to get the show presented at Harlem’s Apollo Theater, there didn’t seem to be much hope for the resurrection of the Brubecks’ witty musical that celebrates the legacy of Louis Armstrong and savages the toxicity of racial discrimination. That is until Dianne Mower, a noted Hartford-based jazz vocalist and choral director at the Greater Hartford Academy of the Arts (GHAA), began her one-woman 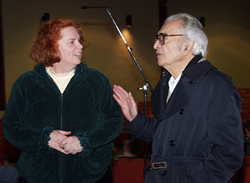 crusade to revive this classic, yet now nearly forgotten piece of Americana.

Thanks, in fact, to Mower’s tenacious efforts a concert version of the Brubecks’ musical will be presented Sunday at 4 p.m. at GHAA’s Theater of the Performing Arts in Hartford. The presentation features GHAA’s award-winning student jazz choir, known as The Real Ambassadors, joined by two superstar vocalists, Jon Hendricks and Kurt Elling. GHAA’s band, dance and acting departments will also collaborate in the ambitious production. The concert, which is part of a benefit gala for GHAA, marks Mower’s latest step in fulfilling her dream of some day getting a full-scale rendition of "The Real Ambassadors" produced professionally on Broadway.

In the early ‘60s Broadway producers considered giving the musical a run, but ultimately turned it down, wary that its satire of racism in Cold War America might be box-office poison. Working with the enthusiastic approval of Dave and Iola Brubeck, Mower has become "The Real Ambassadors" most ardent ambassador laboring to get it back up on the cultural radar screen. 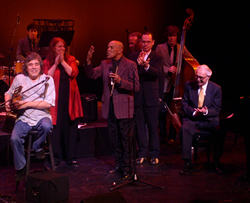 Mower’s hip choristers have even caught the ear of Jon Hendricks, the sultan of scat and guru of grand bopera. Hendricks sat in and with the local songsters at the 2003 Monterey Festival where they won first prize as best high school jazz choral group.

Mower’s mission to rescue "The Real Ambassadors" from obscurity was sparked purely by chance, she says "I was flipping through the used album bin at Integrity "N Music in Wethersfield, looking for old Lambert, Hendricks and Ross recordings, when I came across an album that features the vocal trio’s faces set in little stars. It was the Columbia recording of selections from ‘The Real Ambassadors.’ I didn’t even notice at first that it was a Brubeck album," Mower recalls. Mower bought the discount disc, took it home, tuned in and became hooked on the show’s tuneful music, witty lyrics, its message of equality and loving homage to Louis Armstrong. Suddenly, she was madly in love with a musical she had never even heard of until that first epiphany at the cut-rate bin at Integrity ‘n’ Music.

Quickly, "The Real Ambassadors" became the real motherlode for her classroom sessions, challenging new material for her young choir members to hone their just forming musical chops on. "Initially, I was told by colleagues that this material, with Lambert, Hendricks and Ross, was too hard for these kids to do. At which point, I said, ‘You don’t tell them. I won’t tell them.’ "The kids just took to it like wildfire," she says. Over the decades, rare public outings of "The Real Ambassadors" have been staged in cutback productions, with selections tied together by a narrative read aloud. It premiered in a slimmed down version at the Monterey Jazz Festival in the fall of 1962. Not long after, it appeared in a recorded version cut for Columbia Records and again with additional selections on a Columbia/Legacy reissue released in 1994.

Both the Monterey premiere and the Columbia recording session featured Louis Armstrong as the musical’s hero in a thinly disguised fictional version of himself. Armstrong was supported, both at the premiere and on the studio session, by his combo, Lambert, Hendricks and Ross and vocalist Carmen McRae, with Dave Brubeck on piano. Forty-years after its premiere, there was finally an encore presentation in another pared down version at Monterey. After the standing ovation subsided, the musical quietly slipped back into its more normal state of oblivion. Even after all these years, "The Real Ambassadors," which Armstrong called a "jazz opera," has never had a full-scale theatrical production. Nonetheless, Mower firmly believes it is a pivotal piece of our musical and cultural history that should be exhumed, esteemed and, yes, even exalted. Her long-term dream, she says, is to find "angels" (financial backers) who will provide funding to get "The Real Ambassadors" on Broadway.

When challenged about the staggering task of raising money to launch the show—perhaps millions of dollars-- Mower insists, "It’s going to happen, period! I’m not 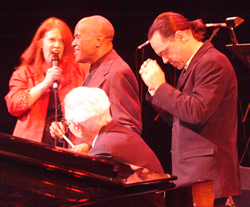 stopping until it happens!" Although no angels have yet materialized, she retains her faith in miracles, hard work and perseverance. Dave Brubeck looks on with approval on her efforts, a kind of Mower power that just won’t quit. "I didn’t think we had a chance," the Maestro from Wilton says, "but the way Dianne goes about doing things, I wouldn’t be surprised if she got it on Broadway." The Brubecks collaborated on the musical out of love for Armstrong and their lifelong passion for equality for all. Dave composed the music and Iola, his wife, wrote the lyrics and libretto. Armstrong was cast as a famous African American jazz musician touring Africa as an ambassador of good will for the U.S. State Department.

One of the musical’s ironic points is that the State Department, as part of its Cold War propaganda effort, was sending abroad black and white musicians, like Armstrong, Brubeck, Dizzy Gillespie and Benny Goodman, to show to all the world that racial harmony reigned supreme in the United States. The bitter reality, however, was that racism and Jim Crow laws –America’s homegrown apartheid system--were still thriving in the States. In 1957, just five years before "The Real Ambassadors" debuted, Armstrong himself leaped headfirst into the battle against racial segregation. Arkansas Governor Orville Faubus had barred black children from entering Central High School in Little Rock.

Armstrong was outraged. The internationally popular entertainer angrily declared that "the way they are treating my people in the South, the government can go to hell." He called Faubus an "uneducated plowboy." President Dwight D. Eisenhower, who initially took no action against Faubus, was "two-faced," Armstrong charged. Armstrong, who was sometimes branded an "Uncle Tom," didn’t often speak out against racism with such public vehemence.

Whenever he did, however, he was viciously attacked, savaged from the left for not being radical enough, smeared from the right for being ungrateful and un-American. Asked about the accusation that Armstrong was an "Uncle Tom," Brubeck pauses momentarily as if pondering the sheer stupidity of this scurrilous, ancient but still recurring question. "Of course, he wasn’t," Brubeck says. "To me it was unbelievable that anyone would say that about probably the most important jazz musician who has ever lived," he adds.

As a white musician, Brubeck stood up for integration, both as a young infantryman in World War II and as a jazz superstar in post-war America. As a piano-playing rifleman in Europe, Pvt. Brubeck integrated an Army band. It was a rare historic coup since the U.S. military was not officially de-segregated until 1948. Later as a famous quartet leader in the 1950s, he refused to play concerts in the South when producers demanded that he not perform on stage with his black bassist, Eugene Wright, or that he not perform for integrated audiences. Despite disastrous financial consequences for himself and his family, Brubeck just said "no" to racism, nixing many potentially lucrative concert dates below the Mason-Dixon Line. "What Louis and Dave had in common," Mower says, "was that they both saw that segregation, or any kind of discrimination, hurts everyone."

Reflecting exactly this ecumenical, democratic philosophy, "The Real Ambassadors" is still relevant today, Mower maintains. It’s significant, she says, not just for its fine music and lyrics, but also because it dared to deal with racism and to promote a then unpopular brand of colorblind brotherhood, she says.

Plus the musical is powered by what Mower calls its "most important element." "When I asked Dave what the most important element is in ‘The Real Ambassadors,’ he told me, ‘Love.’ "That’s it. One word. Love," Mower says. Mower makes the word "love" ring with a sense of hope, of conviction and assent. It sounds like an "amen" to her prayer for the deliverance of "The Real Ambassadors" from its captivity in purgatory to the Promised Land of Broadway.